Back to the Drawing Board! – 2019 Kentucky Derby Analysis

After my defeat in the 2018 Kentucky Derby I told myself I would spend more time watching the preps and getting to know the contenders before May came around. It must have been the tenth time I told myself that. Maybe in 2020!

Regardless, I had my analysis and various contributions ready to go until I saw the news on Wednesday afternoon that Omaha Beach had scratched. With deadlines to meet and a crazy work and travel soccer schedule ahead of me I was a little crunched for time redoing my analysis.

Some people think when a horse scratches, you just pick your next horse. In the case of Omaha Beach, it completely blew up the pace model I had built. While thankful that I know about this change now, not the day of the Kentucky Derby when I am sitting at soccer tryouts, did change not only my pace model, but a few of my contenders. 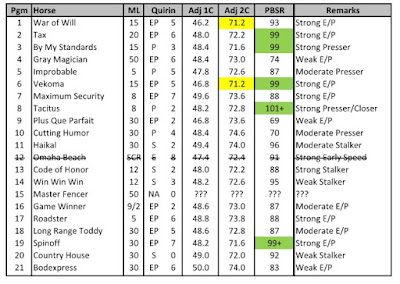 Above are my Pace Based Speed Ratings (PBSR) for the Kentucky Derby.

So let’s get down to business.

8 Tacitus (8-1) – Two races as a three-year-old, two wins. He is looking to be the first colt to exit the Wood Memorial and win the Derby since Funny Cide in 2003. As a matter of fact, in the last 19 years the Wood Memorial has produced 43 Derby runners with only three winners (Funny Cide 2003, Monarchos 2001, and Fusiachi Pegasus in 2000). He does have the highest Pace Based Speed Rating (PBSR) in the field, largely off the two hot paces he encountered in both the Wood and the Tampa Bay Derby. What makes the Wood effort even more appealing is that he overcame some early trouble and still prevailed. I expect the early pace to be contested here even with the defection of Omaha Beach and expect Tacitus to stalk the field from five to eight lengths, sitting in the top half of the field. Tacitus is a Tapit colt who should have no issue with the distance or an off track. Tapit has produced three recent Belmont Stakes winners so the distance is not going to be an issue.

19 Spinoff (30-1) – The post may hurt his chances the most here. I like his last two effort both against hot paces and a troubled trip. He wants to be close to the pace which is going to be a tough task from the far outside. Again, distance is not an issue for a Hard Spun colt with Gone West as his damsire. I think Manny Franco may roll the dice and shoot to the front early.

6 Vekoma (15-1) – He has shown some ability to rate off the pace and won the Blue Grass. The last horse to exit the Blue Grass and win the Derby was Street Sense in 2007, however in the last 19 years the Blue Grass has managed only that one winner in 73 starters sent to post in the Derby. I wasn’t overly impressed with his effort in the Fountain of Youth but think he’ll be key in pushing the expected front runner, Maximum Security, along early to set up the race for Tacitus.

17 Roadster (5-1) – I like this horse. He is entering the Derby just like Justify did last year by winning the Santa Anita Derby after winning a non-winners-of-one allowance race prior. Bob Baffert is always dangerous here and I suspect we haven’t seen this horse run to his full potential yet. I think the pedigree is strong, but others are stronger here. I expect him to be a factor late.

7 Maximum Security (8-1) – I passed on him in the Florida Derby. There was no way I thought he’d get to set a soft pace and cruise home. I was wrong. He only has that one walk in the park race around two turns for comparison, so it is hard to figure what will happen with some pressure in the Derby. With the speedy Vekoma right on his tail he will likely have to go faster than he would like early. Still a contender though given the chance that no one wants to challenge him until it is too late.

Confidence:  Low (My most probable pace scenario is only a 40% likelihood)

So what am I toying with playing?

We'll see what the weather looks like and if there are any scratches or changes first.

So sit back, enjoy a mint julep, and enjoy the most exciting two minutes in sports!